by Marie Hirsch and Doug Forester

What Does That Orchid Word Mean?

Column (col-um) (A)
The orchid’s reproductive organs are combined onto a single column (a gynostemium) unlike the usually separate male stamen/anther and female pistil/stigma configurations of other flowers. This is the primary identification feature of an orchid.

Anther (AN-ther) (B)
At the top of the column is the male anther which contains packets of pollen called pollinia. The pollinia may be reached by removing the anther cap which protects it. The paph (photo left) has two fertile anthers, one on either side of the column.. It also has one infertile anther which has evolved into a staminode (see below).

Anther cap (AN-ther kap)
The covering of the pollinia or pollen-masses on the flower’s column. The (light brown) sticky, waxy cap is what gets stuck to the leg or body of an insect as it brushes against the structure. As the insect moves away, it carries the cap, and the attached pollen mass with it – perhaps to the stigma of this flower, or perhaps to the stigma of a nearby flower of the same species.

Stigma or Stigmatic surface (STIG-mu) (C)
The stigmatic surface lies below the anther. It’s a shallow, usually sticky, cavity in which the pollen is placed for fertilization. On some plants (but not paphs), there is a small growth called the rostellum which acts as a protective barrier to prevent self-pollination.

Staminode (STAM-i-node) (D)
The staminode is a third (and, perhaps, fourth?) anther that has evolved into a fleshy plate. It sits in front of the other two and assists in luring and guiding pollinators across the anthers and stigma. 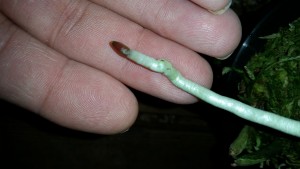 Velamen (vel-LAY-min) The velamen of an orchid is the white or silvery cover on roots of epiphytic orchids. This is a multilayered structure (multiple epidermis) of dead cells with special thickenings in the cell walls. The special thickenings seem to prevent cellular collapse and provide the root with some protection from mechanical injury. When the root is wet, the velamen fills passively with water, aided by perforations or tears in the walls from when the roots went through a drying cycle. While dry, the velamen may provide a barrier to water loss via transpiration from the wet, internal cells of the root.

Velamentous (vel-LAY-men-tus)
A plant which has velamen covered its roots.